or complete our request a quote form 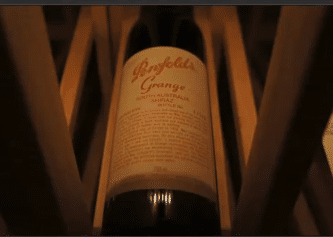 First Bottle in the Wine Cellar

Leslie: Yup. Now this is a cute story actually. I really was torn with the first bottle to put into my custom wine cellars Orange County California. I didn’t know which one. I didn’t have any good bottles at home. I had kind of like my daily drinkers at home. FedEx shows up and I get so excited because I think its stains for my doors, so my doors are going to get stained before my party. So I opened up this box and I pulled it out and it’s a 2002 Penfolds Grange, which I don’t know if you know Grange is not a cheap bottle of wine. It was a gift from a customer in Australia to welcome my cellar home.

Leslie: So it came that day and I thought, “You know what, there’s my first bottle.”

Tim: It does look a little lonely there, doesn’t it?

Leslie: Exactly. I even sent him a photo and what you’re seeing is you’re seeing light cards that basically are telling me, because I made Excel spreadsheets that said this row is going to be for this wine, this type of wine, and this type of wine. So I put it. It was the first bottle to enter my custom wine cellars Orange County California and it had the place to itself the entire first night.

Leslie: Yes, exactly. I just love the fact that now when you look at all these photos it’s just sitting there by itself. This is another silly story – my wine storage locker was cardboard wine tubes, custom made cardboard wine tubes. So you’d open the locker and there’d be rows and rows of cardboard tubes. Basically, I bought these moving boxes and we were able just to take those tubes and put them into moving boxes to move my wine home.

Tim: I see. So typically where do you source your wine? 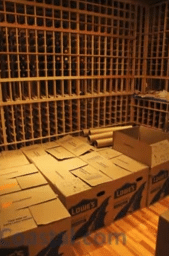 Leslie: Source is mainly a lot of list, among a lot of Cab and Syrah list. When they come out with an offering, I’ll jump on it. There are certain wineries that you don’t want to miss an offering because they will bump you off that list in a second. May 5th, I believe, was the day all the wine showed up. I didn’t have room for all the boxes, so I literally got boxed into a corner. My contractor brought in all the boxes. We ran out of room so I stayed in a corner and started shoving bottles wherever I could fit them. And he goes, “Either you have to leave this room or you don’t have access to the wine cellar racks or I actually box you in” and so he boxed me in.

It took me about three hours to work my way out because I had different wines. I just put them randomly until I could figure out where everything should go. It took me nine hours or half the night. In that photo you’ll see the little video camera I shoved in the wine storage rack. It took me nine hours to simply put the bottles in the correct location, but not categorized or not inventory where they’re at. It took me usually a day and a half to actually, because I’m very anal retentive with my organization, so I’ve marked every single section of the wine cellar racks. Every single space I know where the bottle is. But for party it’s fantastic. 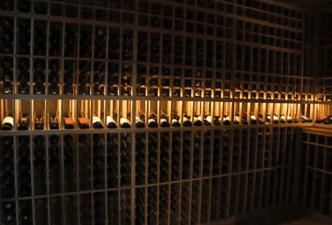 Tim: Do you have any particular plan as to how you’re going to organize it?

Leslie: I already do. There’s a wonderful website, if you’re not familiar with it, called Cellar Tracker (cellartracker.com). It’s basically a web 2.0 way of organizing your wines. Anyone could add a bottle. If a new vineyard comes out with a new bottle, I can go and add that bottle. When someone else buys that bottle, they can then find that bottle online and then they can add that bottle, add their purchase information. If it gets professional scores they could then add that professional scoring information. 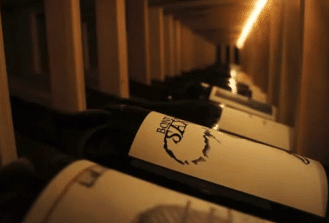 Wine Bottles in a Display Row

For example, if I have a friend that drinks a bottle, they can then post their own personal review on it and shows up on the page for that wine. What’s really neat about it, and this is a perfect example, so I have everything organized so I know where the Clos Pepe Pinot is and someone said to me, “Leslie, I’d like to try a Copain Syrah” and so I was able on Cellar Tracker to use my iPad and go ‘Syrah Copain, show me by drinking window’ and it will show me by drinking window what Copain was ready and where it was located in my cellar, and I was able to go straight to that wine storage rack and pull that bottle out.

Tim: So this is the area where it goes into the closet area behind?

Leslie: Those two rows that you see out of the three at the bottom go straight back to the closet. The third one with the splits is actually against the wall that doesn’t contain the closet. A lot of times people ask me to really put that closet in play and to me I thought it took away considerable from the aesthetic value of the cellar. I just love the way it looks and if we put that closet into play I think it would have taken it away, which is why I really liked the idea of the modular wine cellar racks because I still have a way of being able to get back there.

Having Fun at the Wine Party

Leslie: Now we’re getting into the party which I have a wonderful, wonderful cheese place and the boyfriend of one of the owners just moved back from Napa where he was a sous chef. He put together all the food and they did all the cheeses, mince and everything else. I had 40 people over and we just went crazy. And it goes on. I have three pages worth of photos here. We just had a great time. If you head over to the next page, you’ll see at one point, I’ll be very honest with you, I was a little tipsy. 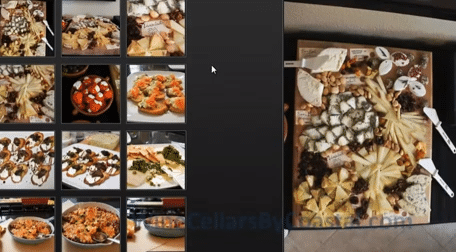 Wine Party at the Wine Cellar

At one point, I was wondering do we really have enough food because I kept seeing them, usually they hang out near the wine, but they kept hanging out in the kitchen. They were going crazy for this guy’s food. I mean, they were just going gaga for it. He did such a great job catering and it was so much fun. He was in the kitchen the entire party. He was making all sorts of different things. It was so much fun and these were lamb sliders. If you look around you could see all the other food out on the table or in my kitchen. But people could care less because any time he brought something else new, they wanted to try it.

Tim: I loved the way you finished on that. It looks like he certainly had a good time. What is this?

Leslie: I do a cheese on wine offline at the Cheese Cave every three months. It’s only open to twelve of us and we always do a different theme. So the theme we have in July is going to be white wines, beers, and sticky wines. The very first cheese cake we did, they were having so much fun. They thought, “Let’s make an extra dessert.”

So it is Effie’s oatcakes with crème fresh and caramel. They just whipped it together at the last minute and all of us loved it so much we annihilated their entire inventory to put back together, which they have never put together before. Every time we go back and do another event we still continue to annihilate all of their oatcakes crème fresh and caramel. Anything else they serve usually we just sell them out of it because they do such a good job of putting things together.

Tim: I love the way it ended in the party. I think you’ve done a great job with these pictures and I think the custom wine cellars Orange County California looks absolutely beautiful. Nice one.